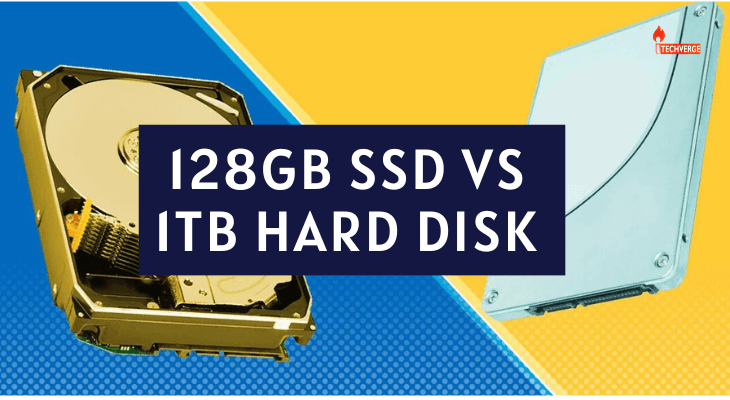 The primary function of an SSD is not only to store data but it is also to improve the read and write speeds of a system, which facilitates various activities such as boot-up and gaming.

As you can see from the above, an SSD with a capacity of 128 GB is quite small for something that is supposed to serve as your secondary storage drive, but what you get for the trade-off are insane IO speeds in addition to all the rest of the things I mentioned.

Moreover, SSDs are more durable in the long run because they don’t have moving parts. An SSD can literally breathe new life into an old machine by enhancing its performance enormously.

SSDs may not be the most suitable choice if you need a lot of data storage. Despite being slower than SSDs, hard drives can store much more data at a fraction of the cost.

According to theory, the price of a 128 GB SSD may be about the same as, or maybe a few dollars higher than the price of a 1 TB HDD. Obviously, if you can afford a 1 TB SSD, you should opt for it, but since you only mentioned 128 GB, I would consider it limited, and you should decide what your priority is – large data storage or fast IO operations.

When it comes to professional use, you will probably need a hard drive (preferably a 7200 rpm ones like WD Blue or WD Black). If it’s the latter, I would recommend upgrading with an SSD (ideally an NVMe SSD such as Samsung 960 Pro, but they’re quite expensive, so maybe you’d be better off with a SATA III-based SSD like Samsung 850 Evo or something).

There is a trend among new laptops to use SSDs as their sole storage device and not to have HDDs available as a secondary storage option with next-generation laptops. So, in such a case, we will be forced to save storage data only on the SSD which is likely to be updated frequently in such a scenario.

How can I increase SSD lifespan?

You should be careful when using SSDs for secondary storage. You will soon run out of SSD life if you constantly delete and write new data to it.
SSDs have expendable memory cells that degrade after a certain number of uses. It is a good idea to use SSD as your primary boot drive, but if you need secondary storage, HDDs are the way to go.
I would like to point out that having data dumped on SSD does not necessarily mean that the computer will run faster. Whenever you open a file from an SSD, the file loads into memory a little faster than if you opened it from an HDD.
It is the processor and the memory/graphics that determine the performance during the use of the file. As a result, it is not cost-effective either.